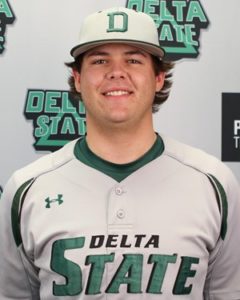 Kade Dees is returning to coach with the East Coast Sox for his 3rd season.

In his first season, Kade was a site director and scout who evaluated and help assign players for our invite-only events.  After one weekend, Kade filled in for the coach of the team that had their coach unable to attend, and he did an amazing job of coaching and sharing his knowledge of the game with the players.

The Sox made the easy decision to give Kade his won team based on the success and professionalism he possessed at such a young age the weekend he coached.

Played one season for Coach Kris Kirtland at Jones County Junior College in Ellisville, Miss.
Saw action in eight games as a reserve catcher.
Hit .235 from the plate with a double and three RBIs.
Was 2-for-3 in a 7-5 win over Nunez.
Added a stolen base vs Coastal Alabama.