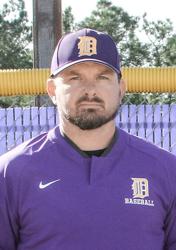 They followed that season with 3 straight years of State Finals appearances; winning back to back State Championships the final two appearances (fastest team in AHSAA history to start a program, appear in a state title game, and win a state title).  Over the 7 years of varsity baseball, they recorded 178 wins with an average of 24 wins per season, made the playoffs all 7 years, won 5 Area Championships and helped 10 players receive athletic scholarships.   Included in that number is one of the top 2018 MLB shortstop prospects and East Coast Baseball player, Jeremiah Jackson, who recently signed his letter of intent to play at Mississippi State University.

In 2017, Coach Eddington accepted a coaching and Asst. Athletic Director position with Daphne High School in Daphne, AL where is working alongside former MLB coach Mike Goff to rebuild the 6A program.