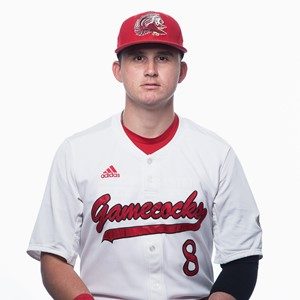 Coach Chase Robinson is a senior at Jacksonville State University.  This will be his first season as a coach for the Sox, but Chase is no stranger to the Sox program.  As a player for the Sox, Chase played on our national team being a tremendous lead off hitter and closer.  We are excited to have Chase back with the Sox.

2019: Played in 52 games as a junior and started 43 games…finished the season with a .217 batting average after collecting 31 hits…drove in 27 runs and scored 29 times…turned in 15 extra base hits, including six home runs and six doubles….also registered three triples…recorded six multi-hit games and seven multi-RBI contests…issued 34 walks and reached base via hit-by-pitch four times…reached base over a span of 13 straight games…carded three hits against Southeast Missouri on April 6…delivered four RBI versus Eastern Kentucky on April 18.

2018: Saw action in 38 games and started in the outfield in 21 games…had 90 at bats and collected 16 hits…finished with 14 RBI and 14 runs…delivered multiple hits in two games as a sophomore with a pair of hits against Florida International on March 2 and a 2-for-4 outing at the plate versus Alabama on May 8…finished with three RBI in the FIU contest…posted an RBI triple against the Crimson Tide and a home run…pushed three runs across the plate the following nigh versus Samford on May 9…carded home runs in three consecutive games versus Morehead State (May 6), against Alabama (May 8) and in versus Samford (May 9).

2017: Earned OVC All-Freshman team honors after hitting .295 and driving in 14 runs during 46 games played … totaled 46 hits, eight doubles, one triple, two home runs, 62 total bases throughout the season … made his collegiate debut in JSU’s season-opening loss at Florida International, when he drew two walks and also recorded his first college hit and double at the same time … concluded the season with a .988 fielding percent, which included only one fielding error in 86 opportunities … helped turned a double play at UT Martin on May 14th … hit .303 in 23 OVC games, which was third best on the team, and had 10 total multi-hit games, including five during conference play, and three multi-RBI games.

HIGH SCHOOL: Prepped at Pell City High School under the guidance of Andrew Tarver…helped the Panthers to back-to-back AHSAA Class 6A State playoff appearances…PCHS claimed the Area 10 title in 2015…named a Second Team All-State performer by the Alabama Sportswriters Association as a utility player…claimed all-district and all-region honors in 2016…ranked as the 28th-best player from the state of Alabama by Perfect Game and the seventh ranked outfielder in the state by Perfect Game…named a 2016 Rawlings-Perfect Game Honorable Mention All-American Southeast Region…participated in the Excel Baseball Academy and played for East Coast Baseball.

PERSONAL: Born on August 21, 1997…the son of Charlie and Jackie Robinson…majoring in political science at JSU.