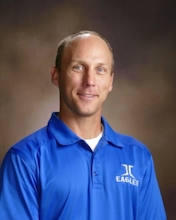 Coach Chuck Cooper has been coaching Jackson Christian Baseball since the Spring of 2005. During his time at JCS, the teams have a combined 387-187 record, eight District Championships (2006 – 2009, 2013 - 2016) and seven State Tournament appearances (2007-2010, 13, 14, 16). Past accomplishments include a 33-13 record in 2007, where the Eagles claimed a State Runner-up finish in the TSSAA Class 1A State Tournament in Cooper’s first season as Associate Head Coach. In 2008, Cooper’s first years as Head Coach, the Eagles compiled a 33-11 record and the Class 1A State Championship. In 2010 the team set numerous team records including 38 wins and were State-Runner up in their first season in Division II. In 2014 the Eagles won their second 1A State Championship in route to a 38-9 over record.

Coach Cooper grew up in Oxford, Mississippi and lettered in baseball, football, and track at Oxford High School where he graduated in 1997 as Class Vice-President. He continued his baseball career as a catcher for Freed-Hardeman University for the next three years until an elbow injury forced him to be a student-assistant coach his senior year. He graduated from FHU in May of 2001 with a B.S. in Physical Education and minors in Biology and Bible. Chuck got his first coaching job at Union University under Andy Rushing in 2001 and completed his M.Ed from Union in 2004. During his time at Union he helped coach the Bulldogs to a Transouth Conference Championship in 2002, where they were ranked 4th in the country. Chuck married the former Dawn Holmes of Jackson (JCS Class of 1998) in June of 2001 and they are the proud parents of Kenzie Elizabeth and Charles Korbin.

“I love coaching baseball for so many different reasons,” says Cooper. “It is something new everyday, but I hope that if my players don’t learn anything else from me they learn to be accountable for their actions, compete everyday, and to live in a way that imitates God."