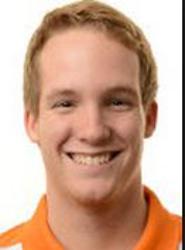 Hunter Mitchem – Serves as 15u Assistant Coach and is our Assistant Director of Operations.