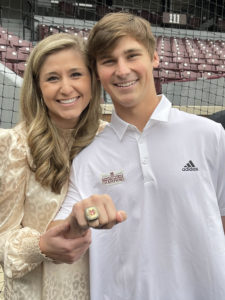 Coach Sykes is currently coaching at the state of MS powerhouse, Hartfield Academy, where he serves as an assistant coach.

In the past for the Sox, Hunter has served as infield coach and WWBA Master coach for the Sox.

In college, Hunter played for the D2 powerhouse Mississippi College where he was four-year starter.  He gave the Choctaws a SS presence for four years.

2018
Assisted the Choctaws in winning the Gulf South Conference Championship and earning a berth into the NCAA Division II South Regional…GSC Academic Honor Roll…played in 40 games with 39 starts…hit .281 on the season with a .333 on-base percentage…recorded a season-high three hits against Lee on Mar. 10 and tied a season-high with two RBI – the fourth of the season…notched 11 multiple-hit efforts and four, multi-RBI performances.

2017
GSC Freshman of the Week…Played in 40 games with 37 starts…hit .285 on the season…totaled 37 hits, including a pair of doubles...tallied 10 RBI…was 10-for-10 in stolen bases…recorded 10 multiple-hit efforts and two multi-RBI outings…recorded a season-high three-hit effort against West Georgia and tied the mark at Valdosta State and against North Alabama in the GSC Tournament…tallied his first multiple-RBI performance at West Alabama and equaled the mark at Valdosta State.

BEFORE MISSISSIPPI COLLEGE
played at Heritage Academy for Bruce Branch…hit .350 for his career with 58 stolen bases out of 60 attempts… struck out 105 batters while posting an ERA of 2.65 for the Patriots…selected to the MAIS All-Star Game…a three-time all-conference North AAA honoree…named to the Commercial Dispatch All-Area Team in 2014 and 2015…a two-time Heritage Defensive MVP and the Offensive MVP his senior season…2014 Wendy’s Heisman Award Winner…also played football and basketball for the Patriots.