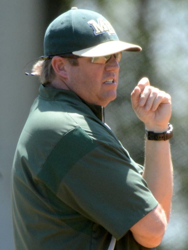 Lee Gann – Serves as an assistant coach for 15u team.

Lee Gann began his career at Mountain Brook High School in 2003. That year they finished with a 26-9 record, runner up in Area 7 and played to the 6A state quarterfinals. The 2004 squad finished 18-17 and a trip to the second round of the state playoffs. In 2005, the Spartans finished the season 23-12. They continue to be strong winning back to back area championships in 2007 and 2008.

During the summer months of 1996,1997 and 1998, Coach Gann was manager/head coach of the St. Joseph Missouri Saints Baseball Club of the M.I.N.K. (Missouri, Iowa, Nebraska, Kansas) Collegiate League. All three years his teams were National Baseball Congress Central USA Regional Champions and his 1997 and 1998 teams were M.I.N.K. League Champions. His overall record was 142-37 with all three teams earning berths to the National Baseball Congress World Series in Wichita, Kansas. His team in 1996 finished 50-14 and placed 4th in the nation.

Prior to coming to Mountain Brook, Coach Gann spent three years at Bob Jones High School in Madison, Alabama. He posted a 75-40 record during his tenure there. In 2001 , his team finished runner-up in the 6A State Finals. Coach Gann earned The Huntsville Times Coach of the Year. He also coached the north team in the 5th Annual Alabama High School Sports Week All-Star baseball game. His 2002 team posted a 31-8 record, won the AI Smith Memorial Tournament Championship and the ASMI/HealthSouth Challenge Championship.