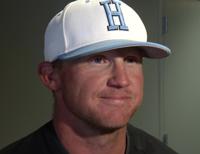 Coach PJ Guy is returning to coach the East Coast Sox for his 4th season.

Coach Guy is a passionate, intense coach who motivates players to be their best day in and day out.  His heart for Jesus and passion for the game can be seen and heard through his witness for Jesus every time Coach Guy takes the field with his teams.  Coach Guy has coached the highest level players with the Sox, and every player to a player has been better for it.

PJ Guy is currently the Head Baseball Coach at Helena High School, Al.  Coach Guy is in his 4th year at Helena where his teams were 2015 Class 5A State Runner Up, and 2017 Class 6A State Champions.  His overall record at Helena is 103-40.

Prior to his career at Helena, Coach Guy was the Head Coach at Sipsey Valley High School, Al.   In 4 years his teams posted a 98-63 record with 3 area championship, and finished in 2014 as the Class 3A State Runner Up.

Coach Guy’s passion for baseball started at Holt High School in Tuscaloosa.  Coach Guy went on to play at the collegiate level at Wallace State Hanceville, and Auburn University Montgomery.  He earned his undergraduate from AUM and his master's degree from West Alabama.

Coach Guy has been married for 56years to his wonderful wife Lee Anne, and they have 1 child.  Ellie Grace Guy who his 2-year-old.