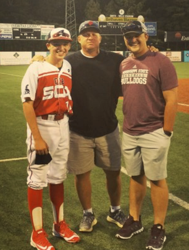 Randy Spring is a Brookhaven, MS, native where has been coaching the high school team for the last 17 years. In his time, Randy has compiled 321 victories while adding a 2004 4A State Championship.

Currently, Coach Spring works as a Jr. High Asst. Principal, while his much much better half and wife Amy is cheer sponsor and elementary school principal.