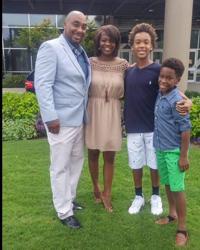 Coach Shaune Holiday is returning to coach the East Coast Sox for his 5th season.

Coach Holiday shows great passion and love for his players by sharing his wealth of knowledge, but more importantly, his great love for his players and families.  Holiday builds culture with all his teams, and he has made the playoffs every year while coaching a Sox team in the summer.  We are blessed to have a Godly man with such much desire to make everyone around him better.

Shaune Holiday graduated from Tishomingo Co in 1992 where he was a 2-time all-state baseball player and 2 time Daily Journal Area. Shaune also played in the Crossroads All-Star game and the NEMCABB All-Star game in 1992.  His highest accolades in high school came when he was #3 in the state in stolen bases and in the top 5 in numerous other categories.

Because of this success, Shaune received a baseball scholarship to the University of Mississippi where he was the 3rd African-American to play for the Rebels.  After 1 year he transferred to play at Itawamba Community College where he earned 1st team all-state in JUCO.

Currently, Shaune has been an assistant baseball coach for 14 years at places such as Itawamba High school (4A) Tishomingo CO (4A) and currently Tupelo Christian Prep (1A). In 2016, his efforts help lead the TPCS team to a State Championship.  From this success, Holiday was selected to coach in NEMABB All-Star game in 2008.

Coach Holiday is married to Chenelle Holiday (25 years) and they have 2 boys Khi and Layth Holiday.  Khi committed to play baseball at Northeast CC.