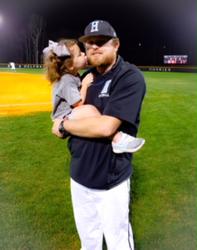 Coach Trent Posey is returning to the East Coast Sox organzition for his 5th season.

Trent develops players as well as any coach we have.  His focus on getting players better has allowed many of Posey's players to go on to play at the next level.  Trent also coached the Honor the Game Wood Bat Fall league as well.

Trent Posey grew up in Calera, AL, and attended Shelby Academy until high school.  He lettered in football and baseball and graduated from Calera High School.

He was offered a baseball scholarship at Stillman College in Tuscaloosa, where he played baseball for 3 years.  Trent graduated from Stillman College with a Bachelor of Science Degree in Physical Education and Health.

While at Stillman, Trent’s team won three SIAC conference championships in baseball. His team also played in the NCAA Div II South Regional all 3 years Trent was there. His team led the NCAA Division 2 in hitting, and he was also named SIAC All-Conference player in 2012.

Currently, Trent is the Head Baseball coach for Helena Middle School. Trent has also served as the Assistant Coach for the Calera High School Baseball team, and he has coached for Field of Angels in Calera for the past 6 years. He also enjoys playing softball with Osborne Excavating.

Trent is married to Rana Posey, and they have a 3-year-old daughter. Trent loves to work with kids and he loves sports.  He believes that coaching truly allows him to have the best of both worlds and it gives him the opportunity to spread the word of Christ through the game.