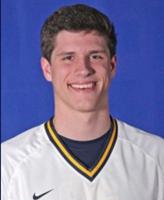 2017
pitched the first no-hitter in program history since 2014 and the first in the GSC since 2013 against Valdosta State…Earned GSC Pitcher and Freshman of the Week laurels for his effort at VSU…Drew 12 starts on the season with 16 appearances…totaled four wins on the mound… logged a 4.16 ERA…tossed 75.2 innings and struck out 44 batters…posted a .269 opponent batting average…posted a season-best six strikeouts against Florida Tech and tied the feat twice during the season at Christian Brothers and at VSU…marked a season-long out of 8.0 innings in the no-hitter against the Blazers.

PERSONAL
son of Kate and Dave Donaldson and Clay and Katie Ingram…majoring in Business Administration.