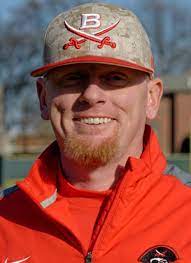 Darrell Howery is returning to coach with the East Coast Sox for his 2nd season.
He has served as the catching instructor at several high schools and colleges, including three years at Lely HS in Naples, Florida, Christian Brothers University and Victory University in Memphis, TN.
Coach Howery has coaching experience working with Division I collegiate players during his time in the NECBL, with the Keene Swampbats, a summer wooden bat league.
He has served as a professional umpire up through the Triple-A Pacific Coast League and now works on the grounds’ crew taking care of the Boston Red Sox Spring Training Complex in Fort Myers, FL.
Coach Howery is a native of the state of Florida, having starred at nationally renowned Jesuit High School in Tampa, where he was on their first state championship team in 1994, prior to playing four years at Erskine College in Due West, SC.  He played all 8 defensive positions in college and earned All-Conference utility honors.
He is married and has four children.