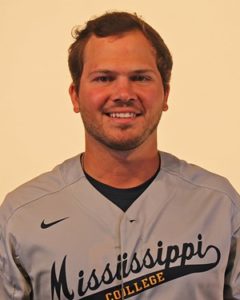 Coach Grant Barber will be returning to coach the East Coast Sox for his 3rd season.

Coach Barber has been a tremendous asset to have a young, energetic, and knowledgeable young coach leading our players.

Barber is currently returned to his alma matter to be an assistant coach at UMS-Wright.  Barber will be mentored by Kevin Raley, who is a legendary baseball coach in the state of Alabama and also an East Coast Sox coach.
Before his coaching, Grant was still playing baseball for Conference Champs MS College.  Below are his stats and bio from his playing days while he was at D2 powerhouse Mississippi College.

2017
All-GSC First Team…only player to start all 48 games for the Choctaws…hit .297 on the season…totaled 46 hits, including four doubles and two triples…was 8-for-9 in stolen bases…tallied 23 RBI…posted 13 multiple-hit efforts and five multiple-RBI performances…recorded a season-high three-hit outing against West Georgia and matched the mark against UAH…recorded a two-RBI effort vs. Lindenwood and equaled the feat four times during the season with the last coming against West Florida in GSC Tournament.

BEFORE MISSISSIPPI COLLEGE
played at UMS-Wright Preparatory for Kevin Raley…the 2016 AL.com Coastal Baseball Player of the Year…hit .458 his senior season with 32 stolen bases and 51 RBI…member of 2016 4A State Champion…three-time all-state and all-county selection…named R. E. Hanks Male Athlete of the Year at UMS-Wright…received captains award his final two years…member of National Honor Society and Headmaster’s List.