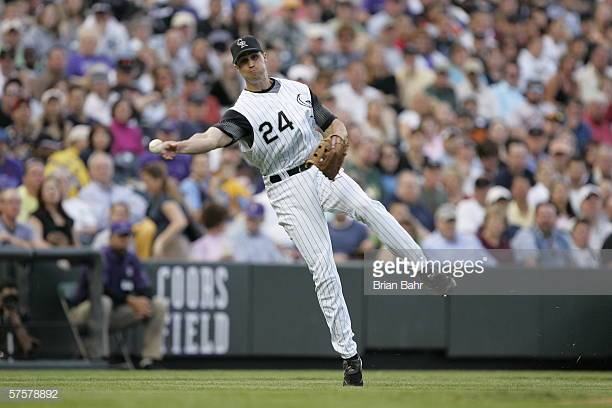 DENVER - APRIL 22: Jason Smith #24 of the Colorado Rockies throws to first against the San Francisco Giants at Coors Field on April 22, 2006 in Denver, Colorado. The Giants won 6-4. of the 1996 Major League Baseball Draft. He made his major league debut with the Cubs on June 17, 2001.

Coach Jason Smith is returning to coach with the East Coast Sox for his 3rd season.

Jason brings a big-league level of understanding to the ballpark every day.  Couple this knowledge with his heart for Jesus, Jason is a perfect disciple-maker and baseball coach for Sox players to be around all summer.  Jason has the ability to challenge players to get better every day.

Smith played in the Major Leagues for many teams. and after stints that started in Tampa Bay, Detroit, and Colorado, Smith was claimed in the Rule 5 Draft by Toronto in December 2006.[1]

He became a free agent after the 2008 season and signed a minor league contract with the Houston Astros on January 5, 2009.

On May 10, 2009, Smith was recalled to Houston for added depth as Lance Berkman suffered a wrist injury.

Smith played for Corky Palmer and Scott Berry at Meridian Community College before being drafted in 1995.

Coach Smith is currently in his second year as a coach at Mobile Christian school where he gets to coach and shares his faith.