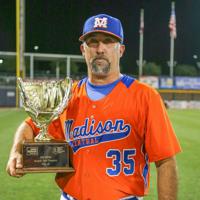 Coach Jerry Dupuy is returning to coach for the East Coast Sox for his 5th season.

During this time, Coach Dupuy has led multiple teams deep into Perfect game playoffs.  Jerry has the ability to see very player's worth and value for each team he coaches.

Jerry has had many roles for the Sox over the years.  He has served as site coordinator, pitching coach, and head coach.  With Dupuy's skillset and expertise, we have used him all throughout the organization as a high prominent coach.

While at State, Jerry was a starter for the Bulldogs amassing 52 innings pitched in the 1994 campaign.

I chose the East Coast Sox because I am able to have a clubhouse again.  All the guys who love baseball and Jesus in one organization allow me to be apart of a great group of men again.