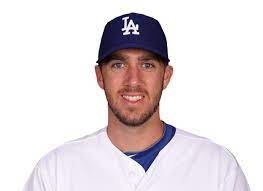 Lance Cormier is returning to coach with the East Coats Sox for his 2nd season.

Coach Cormier currently owns and operates his own personal cross fit gym in Tuscaloosa, AL, while on weekends you can see him sportscasting for the SEC network for SEC baseball games.

Cormier has a historic background in the game as a player.

Lance is the all time winningest pitcher in Alabama Baseball history.  The former CWS Series participant and All-American came to the Crimson Tide from Lafayette, LA.

After college, Lance spent many years in professional baseball...

Cormier went to Lafayette High School, and graduated in 1998. He attended the University of Alabama, and in his pitching career there, he went 31–16 with a 3.98 ERA and 17 saves. Lance started his career as a closer and recorded a University of Alabama freshman record 11 saves. In 2000, he played collegiate summer baseball with the Wareham Gatemen of the Cape Cod Baseball League.[1][2] In his junior year, he switched to being a starting pitcher and went 20-8 in the last two seasons of his college career. A highlight of his college career includes being a first team Academic All-American in his senior year. He graduated in 2002 with a degree in finance.[3]

Cormier started 2004 with El Paso, going 2–3 with a 2.29 ERA in 10 games,[8] including one of his best games on May 6, where he allowed two hits in seven innings and struck out 10. In May, he was promoted to Triple-A Tucson, where he went 1–1 with a 1.77 ERA in three starts.[9] On June 18, he was called up to the big leagues when pitcher José Valverde was placed on the disabled list.[9] Cormier's first major league start was on June 19 against the Tampa Bay Devil Rays and he took the loss, allowing seven runs on six hits in 1.1 innings as the Devil Rays went on to win 11–4.[10] After the game, he was sent back down to Tucson, where he was elected the Diamondbacks Minor League Pitcher of the Month for June.

After being brought back up to the majors in July, he recorded his first big-league RBI on July 24.[11] On July 29, Cormier beat the Houston Astros, 6–4. He pitched six innings while striking out five, and recorded his first major league hit.[12] He made a move to the bullpen after losing his next two games. From August 29 to September 11, batters only hit .136 off Cormier. In his first Major League action, he was 1–4 with an 8.14 ERA in 17 games (five starts).[13]

In 2005, Cormier appeared in 67 games for the Diamondbacks, going 7–3 with a 5.11 ERA.[13] His seven wins tied for fourth place among National League relief pitchers. He pitched 18 scoreless innings at the beginning of the season, and on April 29, he recorded a career-high four strikeouts against the San Diego Padres. He compiled a 1.04 ERA in his last nine games of the season. 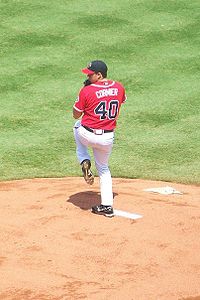 Cormier pitching for the Atlanta Braves in 2007.

On December 7, 2005, Cormier was traded to the Atlanta Braves along with pitcher Óscar Villarreal for catcher Johnny Estrada.[14] He made his first appearance for the Braves on April 3, 2006. After being demoted to the Richmond Braves on August 21, Cormier was called back up to the big league team four days later on August 25.

Cormier suffered an injury during spring training 2007 which kept him out for the season's first two months. In his season debut on June 3, he allowed eight earned runs in only four innings against the Chicago Cubs.[15] In his next start, he allowed five earned runs again against the Cubs.[16] He was later sent down to Triple-A Richmond. After pitching a complete game shutout in Richmond, Cormier was called up on August 2. He allowed two earned runs in relief against the Colorado Rockies on August 3.[17] On August 11, his first start since June 3, Cormier allowed four runs in four innings against the Philadelphia Phillies and left with a no-decision.[18] He earned his first win of the 2007 season on August 27, allowing two runs in seven innings pitched against the Florida Marlins.[19] He won consecutive starts for the first time in his career one start later against the Philadelphia Phillies.[20] He finished the season a disappointing 2–6 with a 7.09 ERA in 10 games (nine starts).[13]

On January 21, 2008, Cormier signed a minor league contract with an invitation to spring training with the Baltimore Orioles.[23] He began the season with the Triple-A Norfolk Tides before being promoted to the Orioles on May 3.[24] He was 3–3 with a 4.02 ERA in 45 games for the Orioles.[13]

On February 16, 2011, Cormier signed a minor league contract with the Los Angeles Dodgers and made the big league club out of spring training.[27] The Dodgers mostly used him in long relief, where he was 0–1 with a 9.88 ERA before he was designated for assignment on May 24.[28] On June 2, he cleared waivers and became a free agent.[29]