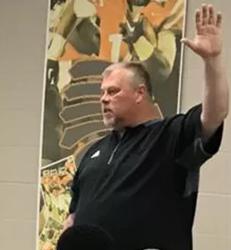 Scott Carter serves as our minister for the Sox organization.

“What a blessing to be part of the East Coast Sox family! In my humble opinion, no other organization does a better job of pointing young men to Christ and teaching them to use the platform of baseball for His glory, while developing and showcasing their gifts, talents, and abilities!” -Scott Carter

Scott Carter knows a few things about SPORTS...A former college basketball player and coach at Millsaps College, he has served on staff with, both, the Fellowship of Christian Athletes and Sports World Ministries. Through the platform of athletics, Scott has had the opportunity to speak to many professional and college teams and athletes including the Memphis Grizzlies, the University of Kentucky, the University of Kansas, Ole Miss, and Mississippi State. And, even though he no longer plays or coaches competitive sports anymore, Scott still exerts as much energy as he ever did by yelling and jumping around like a wild man when he speaks!

Scott Carter knows a few things about MUSIC...As a tour evangelist, he has shared the stage with artists like Jeremy Camp, Skillet, KJ52, Kutlass, Seventh Day Slumber, and SonicFlood. And, besides all that, Scott loves to sing in the shower!

Scott Carter knows MARRIAGE AND FAMILY...He has been married to his high school sweetheart, Michelle, for over 25 years and they have four children (Savannah, Drew, Eli, and Bo) and two grandchildren (Bella Grace and Mary Elizabeth). And, as you can imagine, Scott doesn't get much down time trying to keep up with this bunch. So, if you're looking for him, you can most likely find him either at the church, the school, the ball field, or the road in between!

Scott knows a few things about the REALITY OF JESUS...After a failed suicide attempt as a teenager, Scott spent six months in a mental hospital. Diagnosed with several disorders, he realized that only Jesus could save, heal, and restore him. Scott cried out to Jesus and his prayers were answered. Since then, Scott has walked victoriously through all kinds of pain and adversity, including overcoming a massive aneurysm and stroke which left him paralyzed and unable to talk and, most recently, his youngest son, Bo's, three year battle with cancer.

A veteran evangelist and youth pastor, Scott has ministered to untold thousands of young people at churches, camps, conferences, school assemblies, and youth events, all over the country, telling them about God's power to change lives like his own. And, they don't fall asleep when he speaks!

Despite all that Scott knows, the one thing he knows most is that EVERYTHING GOOD ABOUT HIM IS BECAUSE OF JESUS!