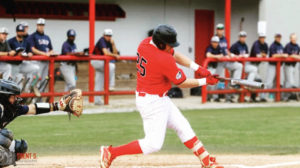 Coach Taylor Clemmons will be entering his first season coaching the East Coast Sox. Coach Clemmons has been a former Sox alumni before going off to play his collegiate baseball for West Alabama.  As a player, Clemmons played hard and was focused every day.  We are excited to see his playing personality transition into coaching this summer.  Last summer Taylor spent his time working for Perfect Game, the world's largest nationally known baseball recruiting and tournament entity.

2020: Named to Gulf South Conference Spring All-Academic Team and GSC Honor Roll ... Played in and started all 20 games in pandemic-shortened season of 20 games ... Started all 20 games at first base ... Batted .264 with three doubles, a triple and 10 runs batted in ... Handled 134 total fielding chances with no errors ... .689 OPS ... Hit .294 in nine GSC games with two doubles and six RBI ... Batted .295 in 10 road games with two doubles, a triple and seven RBI ... Hit .200 in nine home games with a double and three RBI ... Batted .364 against left-handed pitching, .220 versus righties ... .333 hitters with runners on base and when leading off an inning ... Batted .535 with opportunity to advance runners, .600 with a runner on third and less than two outs, 310 with two outs and .381 with runners in scoring position ... Led team with six multiple-hit games and tied for team lead with three multiple-RBI games ... Longest hitting streak was five games ... Longest reached base streak was five games.