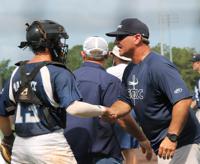 Thomas Wilson is returning to coach with East Coast Sox for his 6th season.

Coach Wilson has been with the Sox program for 6 seasons where he has one a 16u Perfect Game World Wood Bat National Championship.  He has also led 17u teams to a WWBA Runner-Up finish and an astonishing three 3rd place finishes as well.  He has coached the highest level of baseball the Sox play and Wilson and his teams always deliver.

Coach Wilson played baseball and graduated from Jacksonville State University.  He was drafted by the Cincinnati Reds out of college and played three years in the Minor Leagues as a catcher.

Coach Wilson brings a wealth of baseball knowledge with him as a former MLB Scout and Cross-Checker.   Coach Wilson has a passion for seeing players develop their skills and advance to the next level.