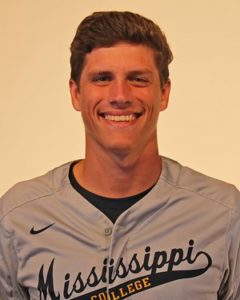 Coach Ingram is currently pitching for D2 powerhouse Mississippi College and he will be a front line starter for the Choctaws.  This coming summer will be Zach's 3rd season with the Sox.  In his first two seasons, Zach has led his teams to the Perfect Game WWBA playoffs each season.  For a young coach, he has maturity beyond his years, and he is a huge additon to the Sox program.

2019
Made 14 appearances with 10 starts…posted a 6-4 record…recorded a 4.25 ERA in 55.0 innings…struck out a season-high nine batters twice with the last coming against Lindenwood…longest outing of the season was 7.0 against Montevallo.

2018
Assisted the Choctaws in winning the Gulf South Conference Championship and earn berth into the NCAA Division II South Regional…made 15 appearances with 14 starts on the bump…posted a .374 ERA with a 5-0 record…posted a season-long 8.2 innings against Union on Mar 31…recorded a season-high, nine strikeouts against West Alabama on Apr. 21…GSC Academic Honor Roll.

2017
pitched the first no-hitter in program history since 2014 and the first in the GSC since 2013 against Valdosta State…Earned GSC Pitcher and Freshman of the Week laurels for his effort at VSU…Drew 12 starts on the season with 16 appearances…totaled four wins on the mound… logged a 4.16 ERA…tossed 75.2 innings and struck out 44 batters…posted a .269 opponent batting average…posted a season-best six strikeouts against Florida Tech and tied the feat twice during the season at Christian Brothers and at VSU…marked a season-long out of 8.0 innings in the no-hitter against the Blazers.

PERSONAL
son of Kate and Dave Donaldson and Clay and Katie Ingram…born on June 23, 1998…majoring in Business Administration.