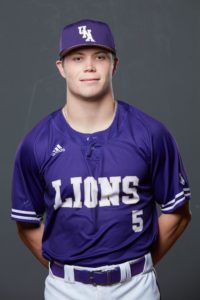 Coach Colt Chrestman is returning to coach with the East Coast Sox for his 2nd season.

Colt has an impeccable work ethic with a strong character that all players love playing for in the summer. As an inspiring coach, Colt is growing and learning from Sox staff and his experience at North Alabama to build great knowledge and ability to coach at a high level.

Cole would love to introduce himself to the Sox below:

Hello, my name is Colt Chrestman. I was born in Tupelo, MS, but I was raised in Starkville, MS. I attended high school at Starkville Academy, where I was a multisport athlete. I had several offers for both football and baseball both but decided to dedicate all my time in college to baseball. I committed to Northeast Mississippi Community College for baseball, where I played two years as the starting centerfielder. I had several offers from 4-year schools but was blessed with the opportunity to continue my career after junior college when the University of North Alabama offered me. I have been at UNA for the past two years, and plan to graduate in the spring of 2020. I plan to be a college coach and I am looking forward to starting my career.

What it means to me and why I am involved.

East Coast is a high school baseball prospect organization, but it is so much more than that. East Coast is more like a family than just an organization. East Coast was the first prospect team I ever played on and I remember that summer like it was yesterday. I remember the teammates I had that turned into friends, the coaches I had that made permanent impacts on my career, and the awesome experiences I had to this day. It was obvious that the organization cared for us as players, but also as young men.
I am a new coach just getting started in this field. I knew there was no better place to start my career. I know that East Coast was one of the most well-known organizations in the south, and I want to learn how to become a good coach from them just like I learned how to become a good player. I am here to develop young men to the best of my ability, and hopefully, be developed by them as well. East Coast molded me into the type of player I am today and I am looking forward to molding young men as well.