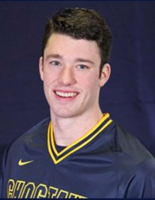 William Elliott – Serves as a outfield and hitting instructor.

William is currently a OF for the Mississippi College Choctaws and former EC Sox player.

William played in 45 games with 44 starts on the season…posted a .291 batting average with 44 hits, including 16 for extra bases, and 27 RBI…led the team with seven home runs on the campaign…notched a season-high four hits at West Georgia on Mar. 25 and tied the mark on Apr. 26 at William Carey…drove in a season-best three runs vs. Union on Mar. 14 and equaled the mark three times the remainder of the season…finished the season with eight multiple hit efforts and five multiple RBI games.

BEFORE MISSISSIPPI COLLEGE
played two seasons at the University of Alabama for Mitch Gaspard…started nine games with 26 games played…registered six hits with a pair of RBI and four walks…played at Oxford High School for Chris Baughman…posted a .400 batting average as a senior at OHS with nine doubles, two triples and 30 RBI…rated as the 11th-best prospect in Mississippi by Perfect Game USA and the second-best outfielder in the state in 2013…named by PG to the Rawlings 2013 Southeast Region Honorable Mention list…Class 5A Coaches First Team All-State selection as a senior…named to the 2013 Clarion-Ledger Dandy Dozen baseball team…a four-time all-district pick…as a junior, led the Chargers with a .387 batting average, a .465 on-base percentage, 35 RBI and nine doubles.